Fandango Band was founded in 2006. The initiative belongs to Maxim Fedorov (bayan), who became the artistic director of the quintet. Inspired by the unique sound format of the ensemble comprised of the bayan and string quartet, Fyodorov decides to arrange the Fandango repertoire bringing together different music styles and trends: classical music, avant-garde, minimalism, instrumental theatre, ethno-folk, jazz, retro, pop and rock hits. All this music is given a new acoustic image when performed by strings and bayan, possibilities of fresh accents arise and sometimes nuances offer paradox implications. The core structure of the ensemble is quintet, although musicians take pleasure in performing compositions for trios, duets and other instrumental compositions involving bayan. Mobility and dynamic timbre transformations form the versatile character of the group which echoes one of the deeper meanings of the word “fandango” – tomfoolery, buffoonery, joke improvisation. Members of the ensemble regularly perform at music venues in Russia and abroad, promoting our country’s musical heritage of past and contemporary times. For instance, the ensemble took part in Mokrousov’s centenary celebrations held in the Moscow Kremlin in 2009. Keen participant of Russian and international contemporary music festivals, this group was present at such events as “The Moscow autumn” (2006, 2010). “Different space” (2009, 2010), “From avant-garde to our days” (2007), “Russia’s musical soul” (2008), “New sound” (2007). Although the ensemble is very young its artistic achievements earned love and recognition of the audience and art connoisseurs and the group was awarded certificates and diplomas of honor by the Russian Federation Ministry of Culture. 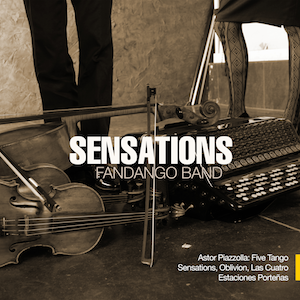